Filmmaker Natalia Almada will be on campus to screen her recent film El Velador: The Night Watchman. 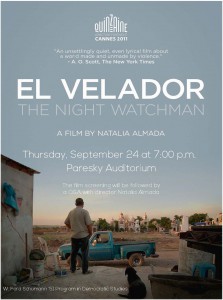 The film screening will be followed by a Q&A with the filmmaker.In her 2011 film, Natalia Almada creates a striking and moving portrayal of the violence of drug trafficking and its effects on Mexican society.

From dusk to dawn El Velador accompanies Martin, the guardian angel whom, night after night, watches over the extravagant mausoleums of some of Mexico’s most notorious Drug Lords. In the labyrinth of the cemetery, this film about violence without violence reminds us how, in the turmoil of Mexico’s bloodiest conflict since the Revolution, ordinary life persists and quietly defies the dead.

Almada, recipient of the 2009 Sundance Documentary Directing Award for her film El General, has also received the MacArthur, Guggenheim, USA Artists, Alpert and MacDowell fellowships. Her most recent film El Velador premiered at New Directors/New Films and the Cannes’ Directors’ Fortnight. Almada’s films have screened at Documenta13, The Museum of Modern Art, The Guggenheim Museum, and The 2008 Whitney Biennial.

Select Williams facilities and events are open to the public. Admission tours are available and guests are welcome at the Williams College Museum of Art, Sawyer and Schow Libraries and outdoor athletic events. Visitors are also welcome at indoor competitions and some performances and events. Proof of vaccination and masking are required for entry. See the Visiting Campus page for details.