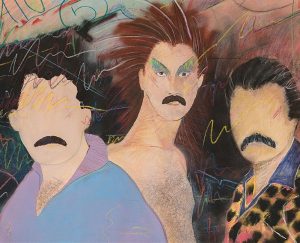 The Museum of Contemporary Art, Los Angeles (MOCA), is pleased to host Axis Mundo: Queer Networks in Chicano L.A., organized by ONE National Gay & Lesbian archives at the USC Libraries as part of Pacific Standard Time: LA/LA. The exhibition will be shown in two West Hollywood spaces, MOCA Pacific Design Center and the ONE Gallery. It will feature more than 50 LGBTQ and Chicano artists who created experimental artworks in a variety of media between the 1960s and early 1990s—a period bookended by the Chicano Moratorium, gay liberation, and feminist movements on one end, and the ravages of the AIDS crisis on the other. Axis Mundo is the result of extensive research by co-curators David Evans Frantz, Curator at the ONE Archives at the USC Libraries, and C. Ondine Chavoya, Professor of Art and Latina/o Studies at Williams College. While developing the exhibition, the curators visited archives at institutions throughout North America and the United Kingdom and met with artists—as well as family members, friends, and collaborators of those artists—whose work has not been exhibited publicly since the 1970s or 1980s.

The remainder of the fall 2020 semester is taking place remotely. See our Covid-19 website for strict health and safety protocols for those who remain on campus. All Williams College buildings are closed to the public and visitors until further notice.