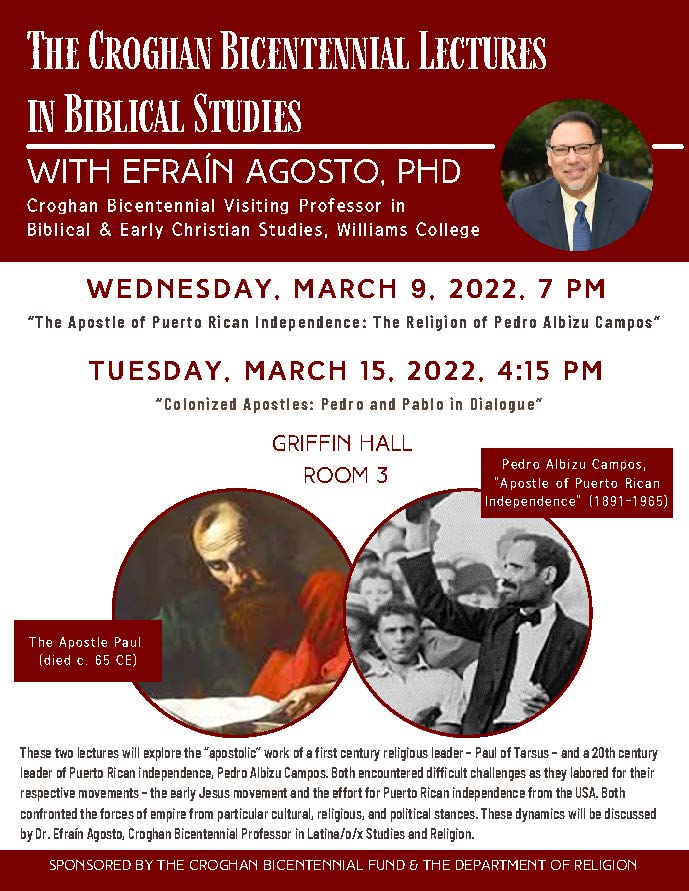 This opening lecture to the two-part lecture series explores the 20th century Puerto Rican Independence Movement Leader, who was referred to as “the Apostle of Puerto Rican Independence.” What kind of “apostle” was Pedro Albizu Campos (1891-1965)? A brief biographical overview of Albizu Campos, featuring the religious influences for his work in advocating independence for Puerto Rico from the “American Empire” throughout much of the first half of the 20th century, sets the stage for an initial comparative analysis in this lecture to the first century “apostle to the nations,” Paul of Tarsus.

This second and final lecture in the 2022 Croghan Bicentennial Lecture series focuses more directly on putting the New Testament “Apostle to the Nations” (an alternative translation to the more well-known term, “Gentiles”), Paul of Tarsus, in dialogue with the “Apostle of Puerto Rican Independence,” Pedro Albizu Campos. After a brief overview of the use of the term “apostle,” then and now, we will focus on how Paul exercised his “apostleship” in the midst of the first century Roman imperial order, and how and why Pedro Albizu Campos became such a strong advocate of independence from U.S. presence in Puerto Rico to the point of imprisonment and death. This lecture argues that both “apostles” ultimately suffered imprisonment and death at the hands of imperial hegemony – both the first century Roman and 20th century US versions – and asks, “Why?”

Covid-19 is an ongoing concern in our region, including on campus. Safety measures are in place, and campus community members and guests are additionally advised to take personal precautions. See the college's Covid-19 website for information about campus policies. For the latest research and recommendations from the CDC, visit cdc.gov/coronavirus.